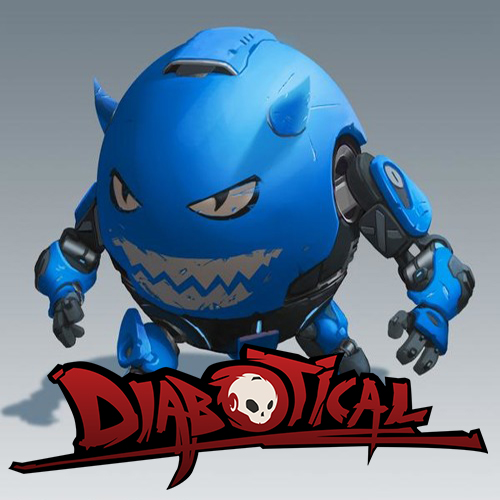 Know where all your enemies anywhere on the map

Diabotical is a fast, action packed, fun first-person shooter filled with color, set in a universe where Eggbots travel from planet to planet, transforming any interesting locations that they find into battle arenas to fight each other for fun!
Diabotical is focused on being a fun game for all, with easy to learn game modes, excitement to be had right off the bat as well as providing more challenging modes for those who will become more familiar with the game’s fast movement, weapons and tactics.

Over 15 game modes to choose from

With a large choice of multiple game modes, ranked team and solo queues, there’s hopefully something for everyone! Customize your eggbot designs then jump into quick play matches with friends or test your mettle versus the best of the best in ranked matches.

Arena 1v1/2v2 is a round based mode played in compact arenas where each player has 2 lives per round and spawns with a full load out, when a round ends players move on to a different arena.

Wipeout is a round based mode where players spawn with a full load out and there are increasing re-spawn times with each elimination in the team. Wipe the whole enemy team to win the round.

MacGuffin is a round based mode where the objective is to bring theMacGuffin to your base to generate 100 coins for your team to win, while preventing your opponents from stealing it to achieve the same goal.

Wee-Bow Instagib is a 5v5 mode where you frag enemies with your Crossbow or Melee in 1 hit, collect the Gold Coins they drop to score points, and use your Knockback Weeball for movement or to knock enemies across the map.

Diabotical includes a variety of weapons that suit different situations and require different skills to master. All modes feature Weeballs! Multiple little grenades with personalities that have utility aspects such as Knockback, Smoke, Slowfield and Healing.

In order to continue working with the community, we’ve packed Diabotical with a lot of creative features from the map editor, hud editor to customizable physics via custom lobbies. Create your own maps using the in-game map editor, the same editor used by our dev team. The next hit map could be just one egg-block away.

The core of Eggbot customization is based on applying Stickers to your Eggbot to make it unique, with over 200 stickers ready. Other customization options such as, Eggshells, Announcers, Music choices, Shoes, Weapon skins, Weapon attachments, Emotes, Sprays and more are also at your fingertips.