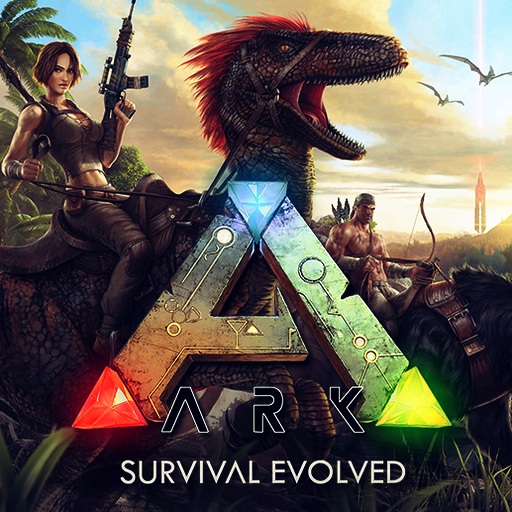 Ark: Survival Evolved is an action-adventure survival game set in an open world environment with a dynamic day-night cycle and played either from a third-person or first-person perspective. To survive, players must establish a base, with a fire and weapons; additional activities, such as taming and feeding dinosaurs, require more resources.[4] The game’s world, known as the “Ark”, is approximately 48 km2 (19 sq mi) in size: there is approximately 36 km2 (14 sq mi) of land with 12 km2 (4.6 sq mi) of ocean.

One of the primary game mechanics of the game is taming creatures. The majority of creatures can be tamed by the player, though some, such as Meganeura or Titanomyrma, cannot. The taming method varies creature by creature. Most creatures are “violent” tames, meaning the players must knock the creature out using tranquilizing projectiles like tranq dart or by using blunt weapons, such as a club. Often times players will need to keep the dinosaur sedated for the duration of the tame. Some dinosaurs take longer than others to tame, therefor require more narcotics. Players are able to use narcoberries, or craft narcotics from narcoberries and spoiled meat. Once knocked out, the player must feed the creature food their preferred food, such as berries for herbivores or raw meat for carnivores. Different foods help tame animals at varying speeds. Most creatures tame most effectively — and quickest — with a food called Kibble, which is an item crafted using eggs from another creature. Some creatures can also be tamed passively, by approaching them and carefully giving them food. Once a creature is tamed, it will follow the commands of the player who tamed them. As well, most creatures can be ridden, and therefore allow the player to utilize the creature’s abilities, such as flight or fast underwater movement.[4] When riding atop certain creatures, players may still be able to use weapons. They can also be used to carry items, and players can issue offensive and defensive commands to them; for example, a pack of Utahraptors can be assigned to defend the base, or a group of Triceratops can be ordered to attack an enemy’s base. Some of the larger creatures, such as a Brontosaurus or Mosasaurus, can have a building platform placed on their back, giving players a mobile, though small, base.[7] The game also features various other animals, such as the dodo, saber-toothed tiger, woolly mammoth, Meganeura, Titanomyrma, and Doedicurus. Every creature in the game has living ecosystems and predator hierarchies.

Players must keep track of various meters, such as health, stamina, oxygen, hunger, thirst, and “weight”, or how much they can carry. Should players take damage, their health meter will gradually regenerate if they have consumed the necessary food, or if they craft items that regenerate the health meter at a faster pace. Otherwise, a player’s health meter will gradually regenerate slowly over time. Players can gain experience through harvesting materials, crafting, killing, or discovering explorer notes. Once the player has obtained enough experience, they will gain a level point, which can be spent improving one of the players stats, which include max health, max stamina, max oxygen, max food meter, max water meter, max carry weight, melee damage, movement speed, and crafting speed. As of January 2019, the maximum player level is 105, plus an additional 30 levels to be gained by defeating end-game bosses. Tamed creatures can also gain experience and level points, which can be spent on similar stats. Creatures spawn into the game at levels ranging from 1 to 150, and, when tamed, can gain up to 75 more levels by gaining experience. There are also dinosaurs which can be tamed at a higher level, the tek dinosaurs. These spawn at a maximum level of 180. There are specific varieties of creature, for instance the Rock Drake, or the Wyvern variants, which are able to spawn up to level 190, but they are untameable in the wild, and instead must be hatched from their respective egg.

Players can build structures throughout the world. To build a base, players must acquire structure components—such as floors, doors and windows built with the resources littered throughout the world—which are earned as they progress and gain levels, then collect the necessary materials to make them. These components can then be crafted and placed in the world. Players can create any structure, as long as they have the logistics and resources; the structural integrity of the building is compromised when the pillars and foundations are destroyed. Structures can be built from various tiers of materials, with better tiers providing more protection, but costing more resources to create. Players start out by creating thatch structures, then moving on to wood, stone, metal, and finally tek, a futuristic and late-game material. There are also glass structures that can be used to gain a greenhouse effect on plants grown inside. Adobe structures block heat from outside for an ideal temperature in the building. Players can also craft items in the game, such as weapons, by collecting the resources and technology required for crafting. In addition, players can craft and attach accessories to their weapons, such as a scope or flashlight for a pistol or machine gun. wikipedia