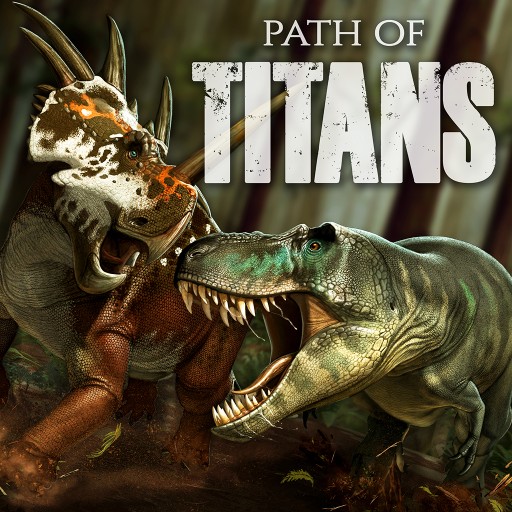 Find all your prey and remain 3 steps ahead of them

Grow faster than your foes and be the APEX dinosaur

What is Path of Titans?

Path of Titans is an MMO dinosaur survival game in active development for PC and mobile devices. Survive as a dinosaur in an ecosystem filled with AI creatures and up to 200 other players. Explore a giant, detailed environment and complete objectives on your own or with members of your pack.

Find water, forage for edible plants, and hunt prey in order to avoid death. But that’s just the beginning. Partake in realistic, environment driven quests in order to gain points to put towards improving your character and unlocking skins or new dinosaurs.

A complex questing system with unlockable rewards and achievements.

Group and Guild systems that allow for pack hunting and herd migration, with servers supporting up to 200 concurrent players.

Swimming, diving, and hunting for fish.

Cross platform functionality, play the game with friends across PC and mobile.

Powerful modding tools with extensive documentation, and a backend allowing modders to deliver their content to other players

With hundreds of unique skins and custom colour options, no two players will ever look alike. Further edit your character by selecting different-looking subspecies that give small stat bonuses. Unlock more skins through quests and achievements to really stand out from the pack!

Each dinosaur species has unique abilities and skills that allow it to carve out a niche in the ecosystem. Carnivores can team up in a pack to hunt larger dinosaurs, and herbivores must defend themselves and their food sources by gathering in herds. Whether you are a fishing Spinosaurus or a charging Eotriceratops, make the most of your abilities to survive!

Begin life as a hatchling and grow to adulthood by completing quests and killing others. Grow in power and strength to take on larger creatures and bigger challenges. Watch your dinosaur seamlessly grow out their horns, plates, spines, and teeth as you make your mark on the world!

With up to 200 players per server, there will always be danger around the corner. Play with anyone no matter their gaming device with cross-platform play! Join a group to improve your chances of survival. Or, join a clan of dozens of other players to chat and coordinate your next big adventure together.